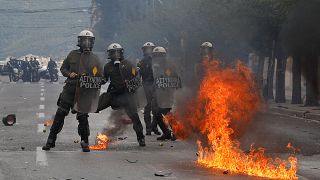 Protesters in Greece threw stones and petrol bombs at riot police surrounding parliament in Athens, who responded with tear gas.

The demonstrators also smashed the window of a bus stop across from the parliament building.

The traditional Evzone guard, a popular attraction for tourists, stationed outside the building, was escorted away as the protesters hurled stones.

The brief incident occurred during a march through the capital by a few hundred students protesting a draft bill changing university entrance requirements.

Reforms will include curriculum changes in the final year of high school and alterations to what are now uniform entrance exams to university, irrespective of the chosen field of study.

High school students say the changes will increase the pressure of exams and could create a system which discourages critical thought.