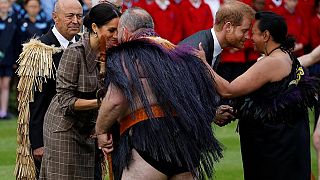 At Wellington airport, Prince Harry and his pregnant wife, Meghan, were welcomed by the country's prime minister, Jacinda Ardern.

From the airport, the royal couple traveled to Government House where they received a traditional welcome.

At one point, the royals performed a "hongi" with indigenous Maori elders, in which they pressed noses together to share a breath.

They were also greeted with a haka performed by members of the New Zealand Defence Force, and a 21-gun salute.