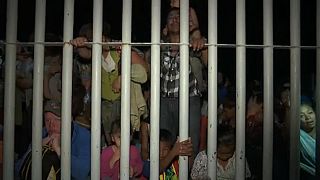 Thousands of people stuck between Guatemala and Mexico

Hundreds of Central American migrants remain stuck on the border between Guatemala and Mexico.

They're part of a caravan of thousands of people determined to make it to the United States.

Now they are stuck on a bridge over a river that marks the border.

Gloria Emilia Mejia, Honduran immigrant says, "They said they'll let us in and that we should be patient, and that we'll be allowed through in order, but we don't have information about where we are staying."

Hounduras has one of the highest rates of murder in the world and many migrants say they are fleeing from both violence and poverty.

President Trump claims that some of the migrants are hardened criminals and said he'd paid Guatemala to stop them crossing into Mexico.