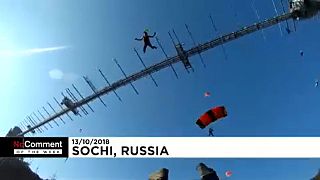 Daredevils from around the globe gathered in Sochi, Russia, earlier this week for the annual base jumping festival. The participants leapt off a 207-metre-high bridge and took in stunning views of the mountains surrounding the city.

Several months of rain fell in just a few hours in Aude, a department in the south of France, triggering devastating flash floods. Fourteen people were killed and thousands had to be evacuated.

The Duke and Duchess of Sussex started their whirlwind tour of Australia this week. In Dubbo, the couple was greeted by five-year-old Luke Vincent, who got real up and close and personal by stroking Prince Harry's ginger scruff.

Back in the northern hemisphere, it's a seal which got close and personal to a group of divers in the Farne Islands, a group of British isles in the North Sea. The friendly animal not only performed for the camera but also embraced one of the divers.

Meanwhile the US city of Houston had a problem: a small pony got stuck in a water drain. Firefighters eventually managed to release the animal by cutting through concrete.