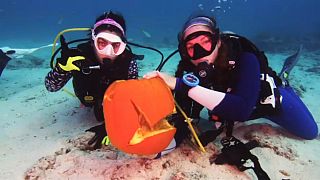 Outfitted in scuba gear and wielding knives, contestants sunk 9 metres below the surface to participate in the annual Keys Underwater Pumpkin Carving Contest. The theme for this year's contest was marine life and contestants could be seen carving sharks, a sea turtle and schools of fish into their pumpkins.

The winning contestants were brothers Sebastian and Gabriel Gimeno, who carved a dolphin into their pumpkin. Besides bragging rights, the brothers from Weston, Florida will receive a return trip to the area paid for by the event's organizer, the Amoray Dive Resort.