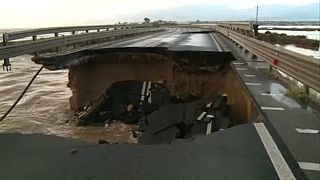 A Highway bridge collapsed after torrential rain caused a river to break its banks near Cagliari in Sardinia. Torrential rain and flooding struck on Wednesday, claiming at least one victim: a woman's body was found by rescuers after she abandoned her car near Cagliari.

The cities of Cagliari and Capoterra were badly affected, while a seafront highway between the two collapsed. Video footage shows aerials of the bridge collapse and emergency services on the ground, surveying the damage.

A sinkhole on the same road, at the level of Capoterra, had already forced its closure earlier in the day.

Schools have remained closed throughout the Mediterranean island.