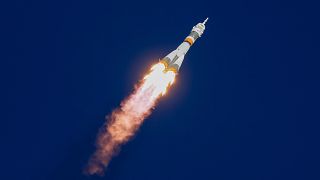 An American astronaut and a Russian cosmonaut have made an emergency landing after their rocket failed on takeoff from Kazakhstan. Nick Hague and Aleksey Ovchinin were supposed to be heading to the International Space Station but instead plummeted back to Earth in what NASA call a 'ballistic descent.' Rescue teams heading to find the astronauts say they are in contact with the crew, who report that they are in 'good condition.'