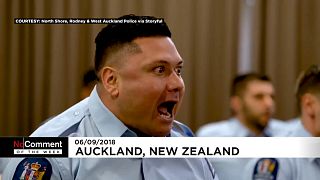 The biennial World Pole Championships kicked off in the East of England earlier this week, where climbers, donning spiked shoes and a strop, have to top a 25-metre pole in the quickest time to win.

In New Zealand, officers from the North Shore, Rodney and West Auckland police performed a passionate Maori Haka at their graduation ceremony earlier this month. Men and women of both Maori and non-Maori descent took part in the war dance which all Kiwi officers learn during training.

Further south, while on a trip to Kaikoura on New Zealand’s Southern Island, a kayaker was left stunned after a seal emerged from the seawater and viciously slapped him in the face with an octopus.

In an interview with the BBC the kayaker, Kyle Masuda, said: "We were just trying to shoot cute seals, but it ended up being very brutal."