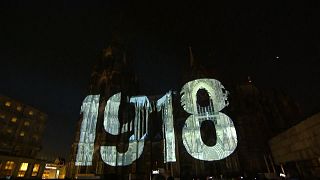 This week, for the first time in its history, Cologne Cathedral will be floodlit with moving images. The official premiere was on Wednesday evening. The light production tells the story of the First World War in moving images and thus reminds observers of the end of the war 100 years ago.

The cathedral is to become a "lighthouse of peace". At the end of 1918, hundreds of thousands of German soldiers from Belgium and France had moved back east over the Hohenzollern Bridge directly next to the cathedral. The illumination can be seen until Sunday (30 September).