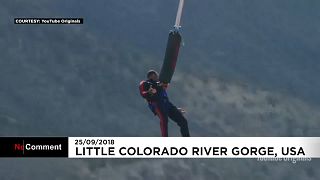 Will Smith marks 50th birthday with a leap near Grand Canyon

Like a scene out of a high-octane action movie that he could star in, Will Smith celebrated his 50th birthday on Tuesday by successfully bungee jumping from a helicopter near the Grand Canyon.

Cameras, which captured the stunt for a livestream on YouTube, showed the actor — hooked to a harness and bungee cords — dangling over a gorge in northeastern Arizona.

The entire event had the feel of a polished episode of reality TV. Camera crews showed Smith, wife Jada Pinkett Smith and his three children being greeted by dozens of relatives and friends on a platform.

His "Fresh Prince of Bel-Air" co-star, Alfonso Ribeiro, acted as host interviewing Smith and others before and after.