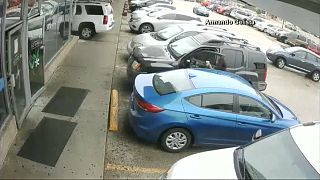 Driver crashes SUV into US bakery window while attempting to park

Surveillance video captured the moment an SUV drove through the front plate glass window of a bakery in Texas on Sunday, injuring 10 people.

The large white SUV crashed through the front of the bakery in Garland, some 20 miles (32 kms) northeast of Dallas, shortly before 10 am local time.

One person was taken to the hospital and nine others were treated at the scene. The driver said he was attempting to park and pressed the gas instead of the brake pedal.

The surveillance video shows that the driver was competing with another car for the parking spot.