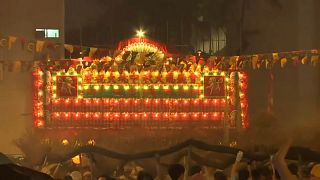 Eighty people lifted a giant fire dragon through the streets of Hong Kong on Monday as part of the city's mid-autumn festival celebrations.

The 67-metre-long fire dragon composed of burning incense sticks was carried through the streets by a team of current and former residents of Tai Hang district.

Originally used to ward off a plague in the 19th century, the Tai Hang fire dragon has been kept alive by the residents, who hold the event annually for three days starting on the eve of the mid-autumn festival.

This year, the fire dragon dance ran from September 23 to 25.