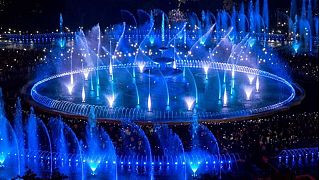 After 4 months of revamping and modernization works, the fountains in Unirii Square become true urban fountains and were opened to the public on September 20th, with a spectacular show, thus becoming a new landmark of the 21st century Bucharest.

This is the first fountain system in Europe to integrate state-of-the-art equipment, creating a new perspective on both water and the city.

The inauguration had a true artistic array which explored a universal recital of water, the show is designed so as to take the visitors on a journey of the 7 worlds depicting Romania – the world of water, fire, earth, air, plants, and the Centennial world, all preceded by the astral world.

The rehabilitation of the fountains is part of a program funded by Apa Nova, with an initial investment estimated at 7 million Euros.

Brussels to have increased police presence for football games - mayor