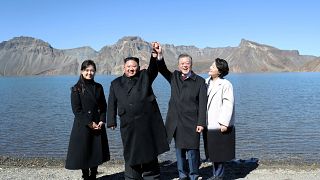 Leaders Moon Jae-in and Kim Jong-un smiled broadly as they posed together at the inter-Korean summit. The leaders also toured the shores of the Heaven Lake inside the crater of the volcano.

Members of the Kim family are referred to as sharing the "Paektu Bloodline," and the volcano is emblazoned on the national emblem and lends its name everywhere, from rockets to power stations.

Many South Koreans also feel drawn to the volcano, which, according to Korean mythology, was the birthplace of Dangun, the founder of the first ancient Korean kingdom, and has long been considered one of the most beautiful places on the peninsula.