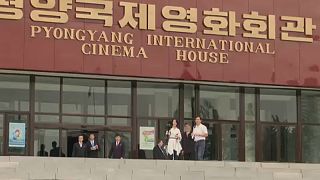 This year's edition of the biennial event will screen more than 500 films from more than 40 countries, according to organisers.

The audience at Pyongyang's "Yanggakdo International Cinema" were presented with highlights of the movies to come, ranging from Chinese action films to documentaries and animation.

The festival opens as the international spotlight is cast on Pyongyang, where South Korean President Moon Jae-in is currently visiting.

The Associated Press was allowed to film the opening ceremony, but North Korean authorities prevented its reporters from interviewing North Koreans out of concern they would ask them questions about the North-South summit.