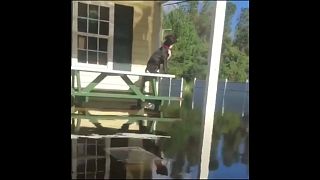 An animal rescue volunteer on Tuesday came to the aid of a number of dogs that had been left stranded in the floods in North Carolina after Hurricane Florence.

Keith Benning, who works with the North Dakota-based Turtle Mountain Animal Rescue, filmed a number of dogs that had been left stranded on things like picnic tables, a car, and inside a house.

Speaking on Tuesday, Benning said he had rescued "about 10 dogs so far.”

The Turtle Mountain Animal Rescue said that they believed that Benning was near the Cape Fear River.