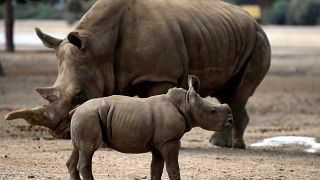 Zookeepers opened the gates of the maternity ward, fenced off from the rest of the Ramat Gan safari, in central Israel, to allow the baby rhino to meet her siblings.

Born on August 14, the female rhinoceros remained at her mother Tanda's side as she was finally permitted to leave the ward.

Tanda and her fifth calf joined the safari's crash, or group, of 300 southern white rhinoceros.

The latest newborn mammal is still to be named, a spokeswoman for the Safari told Reuters.