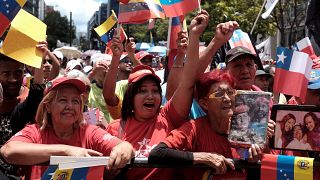 Hundreds of people marched down main arteries in the Venezuelan capital with some carrying signs protesting US President Donald Trump and others chanting their support for their government.

The march follows the revelation that US officials have held secret meetings with rebellious Venezuelan military officers over the last year to discuss their plans to overthrow President Nicolas Maduro, according to a report in the New York Times on Saturday (September 8).

Trump last year said the United States was considering all options with respect to Venezuela, including the "military option."