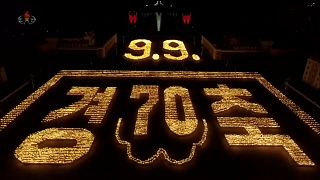 North Korea's torch parades are a unique spectacle, a display of formation marching and running and that requires strict discipline from the participants.

Holding their elbows out at 90 degrees, they dash from position to position to form slogans and other shapes filling the square in the centre of Pyongyang.

The display was part of the commemorations of the foundation of the Democratic People's Republic of Korea, as the North is officially known, on September 9, 1948, three years after Moscow and Washington divided the peninsula in the closing days of the Second World War.