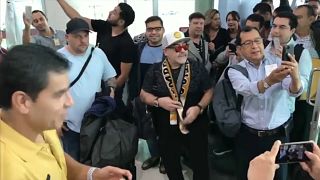 Argentine football legend Diego Maradona arrived in northern Mexico on Saturday to begin his new job as head coach of the second-tier club Dorados of Sinaloa.

Fans turned out in force to cheer on Maradona as he arrived at the airport in Culiacan, capital of Sinaloa state.

Club officials presented the new coach with a cap with the Dorados logo and a scarf proclaiming "Always with you".

Maradona is one of the most recognisable names in international football, having led Argentina to the 1986 World Cup championship in Mexico with his infamous "Hand of God" goal.

As a coach, he guided Argentina to the World Cup quarterfinals in 2010.