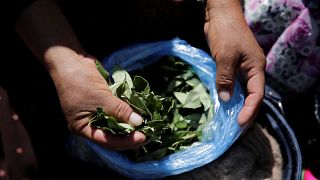 Thousands of protesters took to the streets of La Paz on Wednesday (September 05) in opposition to the government of Bolivian President Evo Morales.

The majority of the protesters were affiliated with groups of coca growers from the Yungas region in the hills and jungles on the eastern slopes of the Andes, who claim the government's coca eradication efforts have hurt their livelihood and led to the death of two of their members.

The Bolivian government has claimed that Colombian and Peruvian nationals may be in the Yungas region providing training and counsel to the coca growers. However, Fernando Arratia, the former leader of a group of coca growers, denied it, saying "there aren't any foreigners or snipers in the Yungas. On the contrary, the government has sent snipers to kill our fellow coca producers."