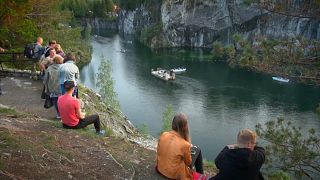 In Switzerland, onlookers spotted a waterspout on Lake Zurich. The natural phenomenon occurred due to a distinct drop in temperature. Although the weather on the lake remained at 23°C, air temperature measured only 9°C, which led to the creation of the vortex over the water.

British Prime Minister Theresa May showed off her dance moves at a school visit in South Africa. Following this, May pledged that the UK would become the G7’s number one investor in Africa by 2022.

In New York City, a street had to be shut down after thousands of bees descended onto a hotdog stand. Around 30,000 bees swarmed onto the food seller's umbrella near Times Square and a beekeeper was called to collect the insects.

US President Donald Trump met with FIFA President Gianni Infantino to discuss the 2026 World Cup. The event is set to take place across Mexico, the US and Canada. At the photo-op in the White House, Trump jokingly brandished a red card at the press.

Unlikely friendships are being fostered at a zoo in Beijing, China. Tiger, lion and hyena cubs are living and playing alongside golden retriever pups at the zoo. The cubs were introduced to the dog after their own mothers refused to feed them.