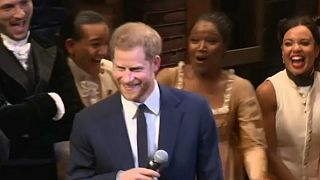 Britain's Prince Harry took to the stage in London with the cast of the Broadway hit musical Hamilton.

The UK royal warmed up his vocal chords by singing the first note of the song "You'll be Back".

The show raised money for the Sentebal charity which was set up by Prince Harry and Prince Sessio of Lesotho to help children affected by HIV in southern Africa.

Hamilton stormed the Broadway stage in 2016 and became a smash hit, netting show creator Lin-Manuel Miranda a Pulitzer Prize in 2016.

The musical takes an unconventional approach to historical events through hip-hop and rap music, with the events of the show rooted in the 18th and 19th centuries.

The musical, which toured the United States, is now housed in the refurbished Victoria Palace Theatre in London.