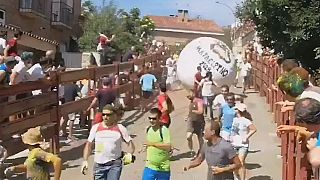 A man was seriously injured at a "ball-run" festival in Spain.

The annual event, which was held in Mataelpino town, outside Madrid on August 26, saw participants run in front of a 250-kilogram ball made of styrofoam.

The man was crushed between the ball and fence, leading him to be airlifted to a nearby hospital

The “Boloencierro” or "Running of the Ball" festival replaced the traditional use of bulls with a large ball eight years ago to cut down costs and dangers to both animals and humans associated with bull running events.