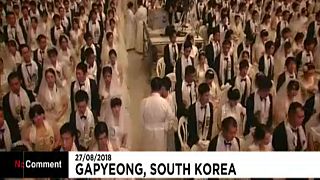 Another 28,000 couples from 190 countries also joined the ceremony through a live online feed, according to the church, which said the event is held to encourage followers to make "holy families".

The Unification Church was founded in 1954 by the late Sun Myung Moon, who declared himself and his wife as messiahs. From 1961 until his death in 2012, he oversaw mass weddings at which thousands were matched with spouses they sometimes had just met and who, in some cases, did not even speak the same language.

Critics vilified his ministry as a heretical and dangerous cult, and questioned its murky finances and how it indoctrinates its followers, often derided as "Moonies."