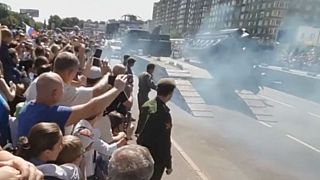 A vintage tank has toppled at a military parade in Kursk, Russia. The Soviet tank T-34, which dates back to World War II, capsized when aiming to mount a transport truck Thursday.

Onlookers caught the mishap on camera and the large machine lost its balance.

The military parade aimed to pay tribute to the 75th anniversary of the Battle of Kursk.

Earlier this year, Russia commemorated the 75th anniversary of the Battle of Stalingrad.

The Battle of Stalingrad is often considered the turning point of WWII, breaking the eastern advance of German forces.