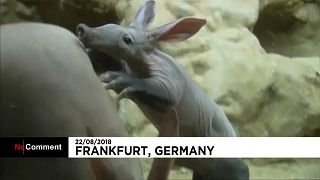 A baby aardvark has been introduced to the public at Frankfurt Zoo, Germany.

The aardvark, Memphis, is one and a half months old and is now strong enough to roam in her enclosure with her mother.

The nocturnal mammal with its characteristically large ears and grey crinkled skin was named after her father, Elvis, who died shortly after she was born.

Aardvarks are burrowing creatures, and spend much of their time searching for ants to eat.

Memphis has a lot to learn, and will also grow significantly larger than her current weight of 7 kilograms.

A typical adult aardvark weighs between 40 and 65 kilograms, and are native of Sub-Saharan Africa.

Although Memphis has become a new addition to the zoo, her species has been bred at the Frankfurt Zoo for more than nine decades.

'Unfathomable tragedy': Girls, 4 and 8, among a dozen killed by storms