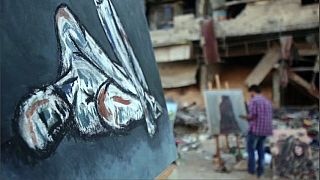 A once busy suburb is now largely deserted, having been war-torn for the last seven years.

Abdallah al-Harith, a 21-year-old, said that the artists are "bringing back life to a dark place".

Harith has recently returned to Yarmouk Camp, a district in Syria's capital city, Damascus, after Islamic State jihadists were ousted from the city.

"I had such a lump in my throat when I first came back to the camp. At first, I couldn't draw anything," said Harith, a fine arts student.

"But then I realised that any glimpse of life amid all this death was a victory," he said.

According to the United Nations, Yarmouk, which was set up in 1957 to house Palestinian refugees, was home to 160,000 people before the outbreak of the civil war.

Since then, over 140,000 evacuated the camp, leaving the remainder to suffer from grievous food shortages.

Since the beginning of the civil war seven years ago, it is estimated that 500,000 people have died while over 12 million have been displaced.