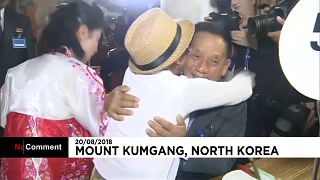 Around 90 families have been reunited at Mount Kumgang resort in North Korea. This marks the first reunification event in three years of families torn apart by the war.

Many of the 330 South Koreans and 185 North Koreans were in wheelchairs while some struggled to recognise their relatives they had not seen since the 1950s.

North Korean leader Kim Jong-un and South Korean President Moon Jae-in met on April 27 in a historic summit, where they agreed to reunify loved ones. It was only the third time leaders from North and South Korea met since the Korean war.

Family reunions began in 1985, but many failed to materialise due to poor relations between the two countries.