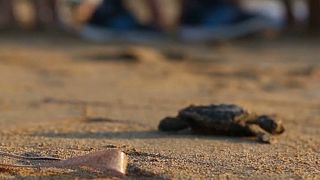 After poaching of the loggerhead and green turtle species nearly led to their extinction, tiny turtles have been gathering numbers in Cyprus thanks to conservation efforts.

The number rose from a meagre 300 nests in 1978, when the marine conservation program began, to 1,100 in 2017, according to Andreas Demetropoulos, founder and co-head of the project.

Given that a turtles' reproductive cycle can stretch as long as three decades, the results are "quite spectacular", Demetropoulos said.

The wildlife ecologist attributed the comeback to continued conservation efforts over the past four decades.

"We protected them against foxes so we managed to put a lot more baby turtles, hatchlings, in the sea.

"In about 20-30 years, those babies matured and started coming back to beaches where they were laid to lay their own eggs.

"The increases have been quite spectacular. Of course, we had to wait 20-30 years to get the first results," he said.

Marine biologist and co-head of the program, Myroula Hadjichristophorou noted that 200 to 300 green turtles lay their eggs on Cypriot beaches, while the number for loggerheads is twice this figure.

The increase of green turtle hatchlings has been a significant success, with the species only laying its eggs in two locations across the Mediterranian: Turkey and Cyprus.

Turtles have called the Mediterranean their home for over 10,000 years. The ancient reptiles have an extraordinary natural system where they lay their eggs on the same beach as their ancestors.