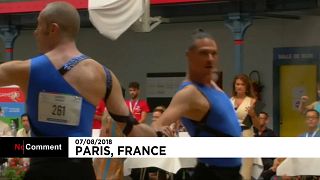 Same-sex duos from around the world brought their skills to the dance sport competition at the Paris Gay Games on Tuesday (August 7), where they competed in several categories divided into age groups, gender and skill level.

Dances included standard ones such as the waltz, the tango and the slow foxtrot, as well as Latin dances like the cha cha, samba and rumba, open to men's, women's and mixed couples.

Nearly 400 dancers registered for the dance sport event, which runs until August 10 and was combined with the International Federation of Same-sex Dance Associations (IFSSDA) World Championship Dance Sport competition.