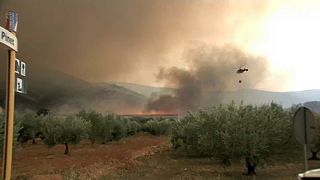 Firefighers struggle to contain wildfires in Spain and Portugal

The wildfires at Llutxent Town in the Spanish city of Valencia are still active after they broke out on Monday, burning down 2,639 hectares of forests in the affected region.

The situation remains complicated today (Wednesday) due to a sudden change in main wind direction. The quick spread of the blaze forced evacuations in the nearby town of Pinet on Tuesday evening.

In the Algarve, Portugal, over 1,400 firefighters continued on Wednesday (August 8) to fight a wildfire that began on Friday (August 3) in the forested hills of Monchique, and has now spread closer to the coast bringing the flames to the municipalities of Silves and Portimao.