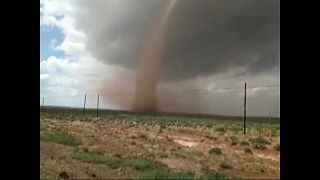 A rare tornado was sighted in a desert in north China's Inner Mongolia Autonomous Region on Sunday.

Five people died in northern China and more than 50 homes were destroyed in a major city in Inner Mongolia, according to state media.

According to data from the local meteorological authority, the tornado occurred at 12:47 and lasted for some 10 minutes before it disappeared.