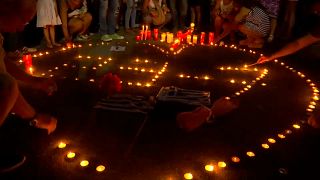 Standing around a heart-shaped arrangement of the glowing lights, some mourners blamed poor governance for the high death toll.

The country's deadliest fire happened a week ago in the coastal town of Mati, which lies 30 km (17 miles) east of Athens. Greek Prime Minister Alexis Tsipras has also faced criticism from opposition parties over the government's handling of the disaster, which killed at least 91 people and left dozens injured.