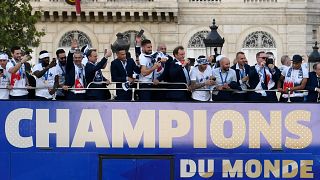 France’s football team were greeted with great fanfare after winning the FIFA World Cup last Sunday. Les Bleus were first welcomed at Charles de Gaulle airport in Paris before heading to the Champs Elysee for the victory parade.

Croatia’s football team who lost 4-2 to France in the final were also greeted as heroes back in their homeland.

In other non-football news, Astronaut Alexander Gerst shared a stunning time-lapse video showing views of the US and Africa from the International Space Station.

Back in Europe, Madrid hosted the Rubik European Championship this week, which gathered more than 600 participants from 48 different countries.