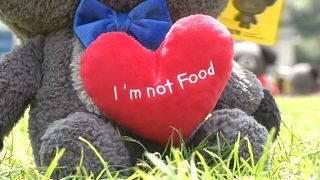 South Korean President Moon Jae-in's dog, Tori, was the face of a canine adoption and protection campaign that launched in Seoul on Tuesday, urging people not to eat dogs.

The campaign, headed by Coexistence of Animal Rights on Earth (CARE), was launched during one of the three hottest days in the year, according to the Korean lunar calendar. During this time, some South Koreans traditionally eat dog meat soup in the belief that it helps beat the summer heat.

Tori was a rescue dog adopted by Moon last year, delivering on a campaign promise to boost awareness of the fast-growing numbers of abandoned animals accompanying a surge in pet ownership.