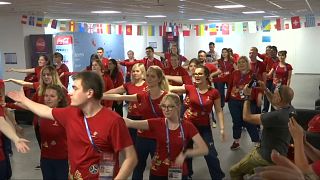 More than 17,000 volunteers helped stage the World Cup in Russia, welcoming spectators to stadiums and fan fests, and assisting teams and journalists with a smile.

As the tournament draws closer to the finals, FIFA officials and former players paid tribute to the stewards, who shimmied to the theme song "Live it Up" at Luzhniki Stadium on Monday (July 9).

Volunteers from around Russia and the world were selected according to their English and communication skills, and their ability to work as a team in stressful situations.