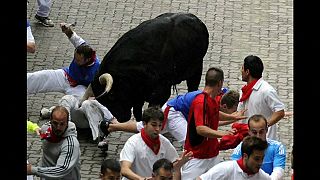 Medical officials overseeing the annual Running of the Bulls in Pamplona, Spain, say that five people have been injured at the traditional festival, with at least one gored by a bull's horns.

Rain before the race left the already narrow cobbled-streets more slippery than usual, and many other runners could be seen being trampled while corralling the massive animals into Pamplona's bullring, completing the 850-metre course in just over two minutes.

The event in the northern Spanish city of Pamplona has strongly been criticised by various animal rights groups in recent years, who say bulls usually die in a slow and painful way.