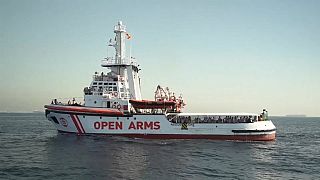 Migrants aboard aid ship share hopes as they head to Spain

The mood was light aboard the Open Arms on Tuesday as it sailed towards Spain carrying 60 migrants rescued off the coast of Libya on June 30.

The Spanish aid ship was expected to arrive on Wednesday morning in Barcelona where the NGO is based.

After being rejected by Italy and Malta, Spain stepped up and offered a safe harbour and a 45-day permit to the migrants, during which they will have the opportunity to apply for asylum in Spain or elsewhere.

On the deck, some rested while others learned Spanish, writing basic vocabulary down in a crumpled notebook.