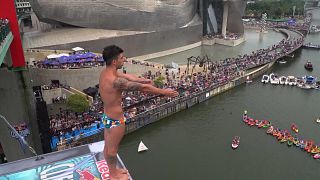 Steven LoBue sealed victory at the second stop of the Red Bull Cliff Diving World Series in Bilbao, Spain on Saturday. It was the American's first triumph since he won at the same location in 2015.

Wet conditions did not deter 25,000 fans, who came out in force to cheer on cliff diving's finest as they launched themselves from a board 27 metres up beside the Guggenheim Museum.