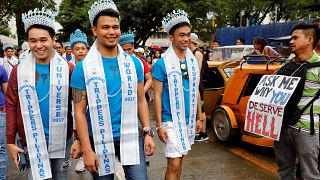 The march's organisers said around 7,000 people turned up for the parade which celebrates gender identity and expression in the predominantly Catholic Philippines.

The Philippine Supreme Court began oral arguments on June 19 regarding a case filed by a self-declared gay rights lawyer seeking to strike down Family Code provisions that prohibit LGBT couples from getting legally married.

The government's lawyer has urged the court to junk the petition for failing to go through the lower courts first and President Rodrigo Duterte's spokesperson said the public was not yet ready for LGBT unions.

A poll conducted in March reported that six in 10 Filipinos opposed same-sex marriage.

LGBT rights groups said homosexual couples should have the same rights to marriage and its economic benefits as other Filipinos, while some lobby for the institution of same sex civil unions as a compromise.