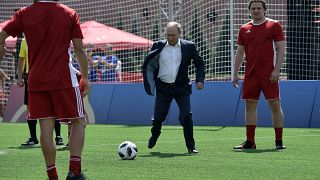 Floods hit Greece and Putin shoots and scores: No Comment of the Week

Many Greeks were left standing in ankle-high water after heavy rainfall caused a flash flood. Residents were powerless to stop the rush of floodwaters, which came pouring over the hills in two separate torrents. It then reached the nearby entrance to the highway in Athens, causing traffic jams.

Meanwhile, it was much sunnier in Los Angeles. But traffic was also stopped after a man in boxer shorts shut down the highway when he scaled a massive road sign. The man then hung huge posters that read "fight pollution not each other," "give a hoot, don't pollute." He was up there for an hour, before casually doing a backflip onto an airbag.

And in Russia, where World Cup news is non-stop: Argentine football star Lionel Messi received a giant chocolate sculpture of himself from Moscow confectioners. It was a present for his 31st birthday at the World Cup. His fans were delighted to tuck into the edible artwork. Also in Russia, football players were portrayed as Gods at an exhibition in St Petersburg called "Like the Gods." It shows football players past and present, as well as some managers, in the guise of great military leaders.

And more football festivities across Russia — as Sweden, Mexico, and Switzerland all celebrated wins and getting through to the Round of 16. And finally, his country is hosting the World Cup, so it came as no surprise when President Vladimir Putin tested his football skills in Red Square. He was joined by FIFA President Gianni Infantino and they each scored goals.