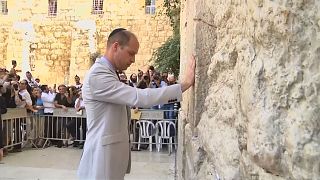 Britain's Prince William on Thursday (June 28) visited Jerusalem's Western Wall, as part of a tour of Jerusalem's most sacred and sensitive sites, wrapping up a politically delicate visit that both Palestinians and Israelis, locked in a lengthy conflict, were able to embrace.

After visiting Islam's al-Aqsa mosque William arrived at the Jewish sacred site, accompanied by rabbis, and walked up to the Western Wall through a passage formed across the plaza by police barricades that held back a crowd of onlookers.

Wearing a skullcap and following a Jewish tradition of offering a written prayer at the wall, he placed a note between its stones, rested the palm of one hand against them and leaned forward in silent reflection.