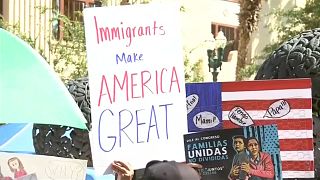 Protesters gathered in New York on Tuesday to rally against a Supreme Court ruling to uphold President Donald Trump's travel ban. The US Supreme Court's decision came down earlier in the day.

Muslim individuals and groups, as well as other religious and civil rights organisations, expressed outrage and disappointment at the high court's rejection of a challenge that claimed the policy discriminated against Muslims or exceeded the president's authority.