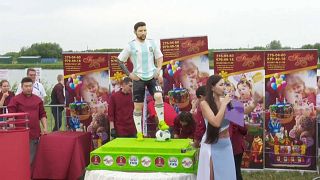 The residents of Bronnitsy, where the Argentina squad are based during the World Cup, made a giant cake in the shape of Lionel Messi to mark his 31st birthday on Sunday.

While Argentina's World Cup may not be going as well as they had hoped, a birthday is always cause for celebration - at least to the residents of the small Russian town of Bronnitsy where the South Americans have based themselves for the tournament.

For Argentina captain Lionel Messi's 31st birthday on Sunday, hundreds of residents celebrated with a colourful music festival and, in the absence of the great man himself, a giant life-size cake in his image.

Rumours that Messi would drop in on the celebrations proved to be just that - so we may never know what he thought about his giant chocolate and sponge twin, but his birthday was certainly a good excuse for a party in a town that has taken Argentina to its heart.