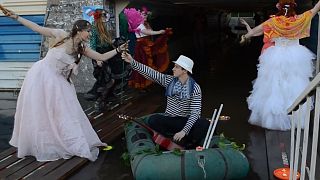 It's summer, which means it's the perfect time for a romantic boat ride along one of Venice's famous canals — or, for one Russian group, to aim for something like it, anyway. The collective decided to host their own Venetian-themed carnival at a flooded underpass in their hometown of Ob.

The stunt was done to bring to light a serious problem for pedestrians: crossway Oktyabrskaya beneath Ob's federal highway is so badly flooded, it's virtually inaccessible to residents.

Residents are forced to cross it each day in knee-high rubber boots on makeshift wooden decks that have been laid out on top of the water, while others are forced to simply run across the highway.

'Ob exists, and it's worthy of being looked at'

A group of users on VKontakte's “Town of Ob Online” page came up with the idea of staging and filming a “Venetian Carnival” in the river of the underpass.

“This act is a gentle reminder to authorities that Ob exists, and it's worthy of being looked at... It's basically the spiritual gateway to Novosibirsk," Vorobyeva told Euronews.

The carnival included dance performances by women dressed up in costumes and knee-high rubber boots while a “gondolier” on an inflatable boat struck Italian music themes on his guitar. For additional “romantic atmosphere,” candles gently floated on plates atop the surface of the water.

In addition to the flooding, the underpass has become a reservoir with an abundance of fish.

The flooding has been ongoing for about three years, according to Vorobyeva.

In 2016, TUAD conducted an investigation to find that in addition to heavy rains during rain season, the flooding was a result of a change in the position of the vertical drainage systems of Ob.

Officials at the Territorial Management of Roads (TUAD) say the problem requires an overpass to be built, which the minister of transport has denied on account of a lack of budget.

Construction of permanent concrete sidewalks to replace the less stable wooden decks is said to be completed by the end of summer. Currently, water is being drained via a motor pump.

To prevent further flooding, under the supervision of Andrey Travnikov, minister of natural resources and ecology of Novosibirsk, and in collaboration with the town administration, a project of water level reduction will be developed for the entire town.