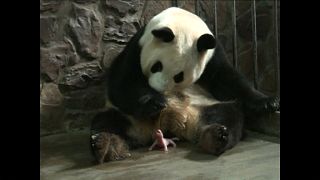 The first pair of male giant panda twins this year were born in southwest China's Sichuan Province on Friday morning.

Aili, the mother panda, gave birth to the twins at the Chengdu Research Base of Giant Panda Breeding.

The mother and cubs are now in good health, according to the base's staff. The cubs were also the world’s first pair of male giant panda twins born this year.