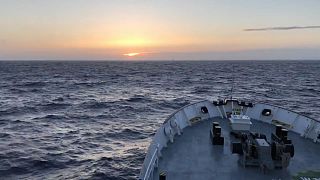 Inside the Aquarius as it sets sail for Spain

Rescue ships transporting 629 migrants from the Libyan coast to Europe are en route to Valencia in Spain. The Aquarius is currently carrying around 100 passengers, while the rest are spread between two Italian boats escorting the vessel.

The voyage has been wrought with difficulty: The Mediterranean crossing between North Africa and Europe is dangerous — more than 600 people have died so far this year while attempting to cross it — and questions over where the Aquarius ship should land prompted a diplomatic row between Italy, Malta and France before Spain stepped in.

Steering the boat are NGOs Doctors without Borders (Medecins Sans Frontieres) and SOS Mediterranee, and Euronews’ correspondent Anelise Borges has been documenting the journey, which is expected to last until Monday — more than a week since its departure.