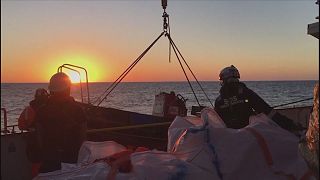 Migrants being rescued by Aquarius

A private rescue ship carrying 629 migrants remained at sea on Monday after more than a day of not receiving permission to dock in either Italy or the small Mediterranean island nation of Malta.

Aid group SOS Mediterranee said the passengers on its ship, the Aquarius, included 400 people who were picked up by the Italian navy, the Italian coast guard and private cargo ships and transferred.

The rescue ship's crew itself pulled 229 migrants from the water or from traffickers' unseaworthy boats on Saturday night, including 123 unaccompanied minors and seven pregnant women.

The Aquarius and its passengers were caught up in a crackdown promoted by the right-wing partner in Italy's new populist government, which has vowed to stop the country from becoming the "refugee camp of Europe."