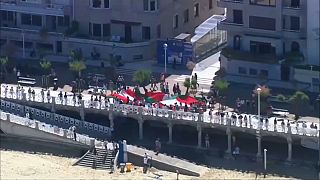 Tens of thousands of people from Spain's Basque Country joined hands to form a human chain on Sunday, calling for the right to hold a regional independence vote.

Running some 202 km in length, the human-chain protest was organised by Basque group Gure Esku Dago (In Our Own Hands) and ran from Donostia (also known as San Sebastian) to the Basque parliament in Gasteiz (Vitoria).

Spain's Constitution (created in 1978 after the end of dictator Francisco Franco's regime) states the country is indivisible. Last year's attempt by Catalonia to hold a secession referendum was met with a harsh legal crackdown.

Former Prime Minister Mariano Rajoy, who has been roundly criticised for his handling of the Catalan crisis, was ousted by Socialist leader Pedro Sanchez in a no confidence vote on June 1.

Sanchez, who now heads the government following the vote, has called for renewed talks with the Catalan leadership.

While most from the Basque Country, which already has a high level of self-determination and, like Catalonia, has its own language and culture, do not support independence, many believe the population should be given the right to vote.

The Spanish government, backed by the constitutional court, maintains that any ballot on regional independence is illegal.

An Octover 1 ballot on Catalonia's separation from Spain and consequent unilateral declaration of independence by the regional government prompted Madrid to take control of the region and arrest the civil servants involved in the vote.